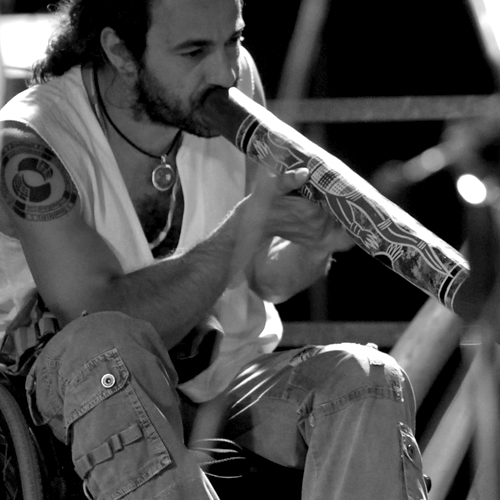 He is from Italy, he is a famous Didgeridoo playing and a great lover of Australian Aboriginal culture.
Before he developed this strong passion for Didgeridoo, he used to play percussions, but in 1996 he felt in love with Australian culture after watching a movie about Aborigines. He received a Didgeridoo as a present and he started playing the instrument.

In the first two years he was an autodidact, taking inspiration from some musical CDs he used to listen to (David Hudson, Nomad, Alan Dargin e Mark Atkins records).
After he learned playing the instrument, he dedicated himself to the production of the australian instrument.

In 1999 he took part of two music projects being a co-founder of two different groups.
One of these project was named “Tamtam flute”, and the other one was called “Shatadoo”.
In 2001 he had a terrible accident, and he was forced to be on a wheelchair, but that terrible event didn’t stop his passion for music.