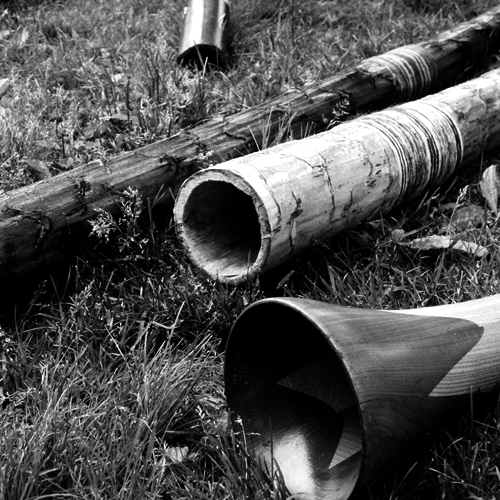 Targets:
The lessons want to build the basics for a first approach with the musical instrument, studying the features and basical playing techniques.

Topics:
– First approach to the musical instrument (background and history of the origins)
– Musical instrument, features and sound influences
– Differences between different kinds of Didgeridoo
– Traditional Didgeridoo and western developings

First approach to the sound:
– Posture
– Basic sound and position of the mouth
– Vocalizations
– Introduction of armonic sounds
– Use of the voice
– Use of the TOOT and tonal variation

Introduction of the use of Breathing:
– Circular breathing
– Study of a first rhythmic base
– Basic technique of rhythmic composition

The lessons level will change according to the learning of every single partecipant.
For those who do not own a Didgeridoo it will be possible to get one till the end of the lessons.

Traditional Didgeridoo lessons: Yidaki and Mago
– Short introduction to the 2 different kinds of Didgeridoo from the Arnhem Land tribe of Australia: Yidaki and Mago
– Differences of the sound and mouth position between western and aboriginal techniques
– Step by step explaination of the fundamental rhythm of the “Hard Tongue”, sound technique for Yidaki, teaching singing and playing version
– Advancement of fundamental rhythm of the “Hard Tongue” with voice insertion
– Teaching of different kinds of Starting/Ending of the rhythm “Stopped intro and final”
– Explaination of the “Mago” technique, the “Gumborg” or “Gunborrk”

Every participant will have a explaination book to get to know better the steps of the lesson.